August 04, 2019          566 views
The itinerary for a tourist visiting Hanoi typically includes some sightseeing for Instagram photos and trying out a bowl of ‘pho’ or a ‘banh mi’, possibly with a cup of egg coffee.

Then they could relax after a full day of walking with a beer, or a lot more, in the evening on the party street of Ta Hien.

And that’s it. A day’s holiday in Hanoi could be wrapped up just before midnight.

Tourists flying from afar to Vietnam often want more than a full eight hours sleep, but nightlife in the country, not only in Hanoi but other popular tourist attractions like Ho Chi Minh City, Da Nang, Nha Trang and Phu Quoc, is yet to catch up to demand despite rapid development over the years.

The Government has been hesitant to encourage nightlife for years, mostly due to security concerns. That might change soon, thanks to Prime Minister Nguyen Xuan Phuc.

Recently, the PM asked ministries and localities to look into a new economic policy of China, which aims to promote the nightlife economy to help balance the losses the country has suffered from the ongoing trade war with the US.

The capital city of Beijing encouraged services and businesses operating between 8pm to 6am by granting money to support their operations. Areas, for example, would receive about 700,000 USD to run through the night, while businesses could have up to 70,000 USD for expansion.

Other mega cities like Shanghai, Tianjin and Chongqing are also paying more attention to their nightlife economy.

The PM’s order on Vietnamese nightlife caught the attention of economists, who have long argued that a boring nightlife was a key reason for slow growth of tourism compared with the number of tourists.

According to statistics of the Vietnam National Administration of Tourism, 2018 witnessed a record high in the number of inbound and domestic tourists to the country, with a year-on-year increase of 29.2 percent to nearly 15.6 million visitors. Revenue growth, however, increased only 21.4 percent.

“Most tourism services now focus on the period of time between 7am and 5pm. They create the so-called ‘hard revenue’ while the services that earn the most are from 6pm to 2am,” Ky told Tuoi Tre (Youth) newspaper.

“They (nightlife services) are not developed properly and tourists have nowhere to go and spend their money. It is such a waste.” 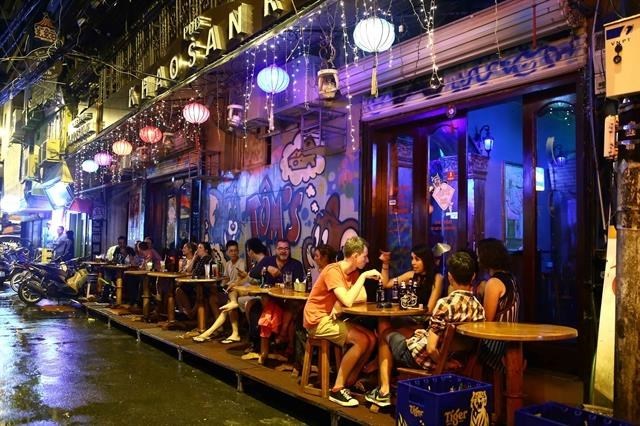 A restaurant on Ta Hien Street in Hanoi's Hoan Kiem district is full of customers at night.

Surveys by Vietravel show the “hard revenue” – or income from daytime activities – accounts for only 30 percent of total tourism revenue while 70 percent comes from nightlife.

According to Ky, the absence of quality nightlife was critical to the tourism industry as tourists were not interested in returning to Vietnam while locals earned less than they could.

Vietnam’s return rate is dramatically low, at merely 6 percent, compared to the rate of neighbouring countries Thailand and Singapore. As many as 82 percent of travellers visited Thailand more than twice and 89 percent came back to Singapore.

“Nightlife entertainment and services are the biggest source of income of the tourism industry but Vietnam completely neglected them,” Luong said.

“Not to mention the taxes the Government could have collected from nightlife businesses,” he added.